Medical professionals owe a duty of care to patients and consequently require independent clinical evidence to justify deviation from accepted norms. Throughout the 20th Century, the pharmaceutical industry made many breakthroughs with the result that many patients developed a dependence on pain killers, antibiotics and anti-inflammatories to the point where superbugs began to build immunity.

In addition, the side effects of long term use of pain killers have not been recognised by the general public until relatively recently.

Historically, cold water immersion, especially cold salt water, was seen as an effective way to combat pain, inflammation and infection, but it lost it’s advocates with the rise in modern pharmaceutical discoveries.

Today there is a growing body of evidence to support the traditional use of cold salt water for a range of conditions.

In 2004 Clare J Proudfoot and others from the University of Edinburgh proved that applying cold to the skin triggered transient receptor potential channels (TRP’s) that blocked pain signals being sent to the brain. The interesting aspect was that pain was blocked generally even though the cold was only applied to one limb.

Even more recently another case report published in the BMJ in July 2018 by Christoffer van Tulleken from University College London showed how cold water swimming was effective in alleviating chronic post-natal depression after seven years of conventional treatment failing to resolve the issue.  Link…

What injuries* could benefit from cold therapy?

With the medical community conducting more research into the benefits of cold water therapy and the effects it has on patients and their recovery it is becoming increasingly apparent there are several areas of which cold water therapy could be more beneficial than conventional pharmaceutical interventions.

An additional point of interest is the lack of side effects and the inexpensive nature of cold water therapy.

How cold water therapy helps with recovery in patients

Medical professionals are finding that cold water therapy after ACL or MCL surgery has several therapeutic benefits such as pain reduction because nerve activity is slowed down, as blood vessels compress reducing blood flow to the area, reducing swelling to the injury which leads to faster healing as cellular activity slows down.

Cold water therapy will decrease the temperature of the tissue which stimulates the cutaneous receptors, reduces swelling and inflammation, limiting the degree of injury for your patient, without the use of non-steroidal anti-inflammatories, which can slow down the bodies natural healing process.

What benefits would a CryoSpa ice bath have for your medical facility?

“The CET CryoSpa that we have installed at Widnes Vikings has been invaluable in helping the management of fatigue and recovery in our squad of players. Colin was able to provide us with a high quality product that was fitted into a difficult space – the solutions that he provided were much better than the concept that we had originally planned!

The product was installed very quickly. The daily maintenance is minimal and fits easily into our busy schedules. All the players use the spa at least twice a week, and feel that it really aids their recovery – when you consider the performance demands that are placed upon the squad, it can be seen why this is so important!

I would happily recommend Colin and the CET Cryospa to anyone who is working with performance athletes.”

Cryotherapy is the application of cold to produce a cold induced therapeutic effect.

Any temperature below the temperature of the skin, typically around 30°C / 86°F, can be considered to be cryotherapy though temperatures above 15° or 20°C / 60°F or 70°F will only have a mild effect.

Air temperatures can go as low -150°C / -200°F as air has a very low thermal conductivity (air is an insulator) but at these extreme temperatures cooling is solely by conduction to avoid severe frostbite.

How does an ice bath work?

Some inflammation is a good thing but too much can lead to secondary damage or hypoxic injury.

The mechanisms include aiding normalization of body temperature, flushing out muscles due to constriction of blood vessels & compression through hydrostatic pressure, a decrease in metabolic activity, balancing of the sympathetic & parasympathetic systems and a reduction in muscle damage. 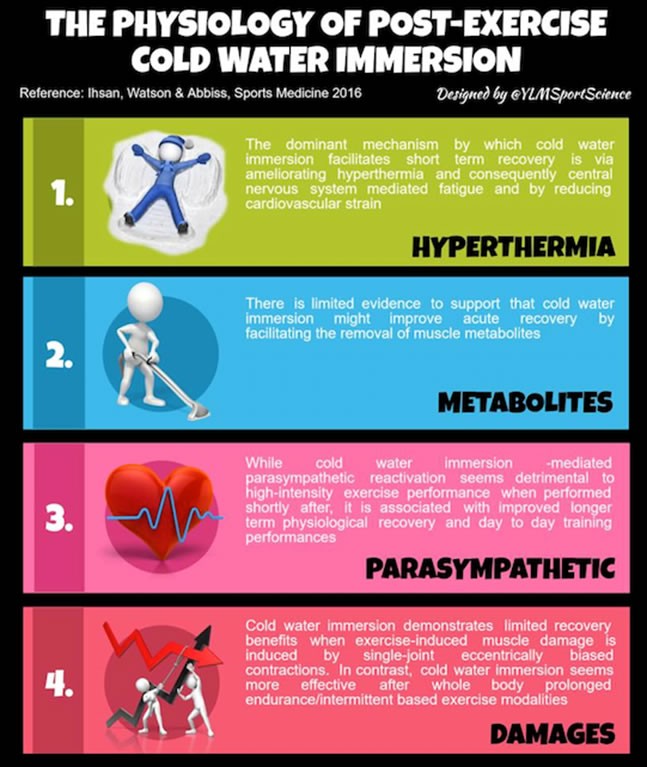 However, treatment of soft tissue injuries such as tendon & ligament sprains is considered to be medical use.

In the USA, the FDA, which approves devices & medicines for medical use, have exempted hydrotherapy, such as CryoSpa therapy, from Medical Device Approval requirements due to the low risk to patients and the non-invasive nature of the therapy. Consequently, CryoSpa therapy is available for medical use throughout the USA.

In other countries that adopt FDA guidelines this rule will also apply.

In the EU hydrotherapy is not exempt from medical device approval so a manufacturer cannot make medical claims for such devices.

* Medical use may be limited in some countries. Please ask for details.